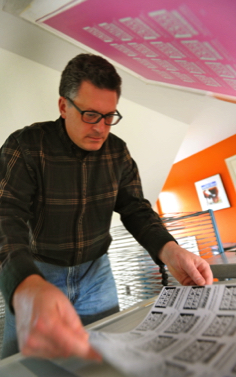 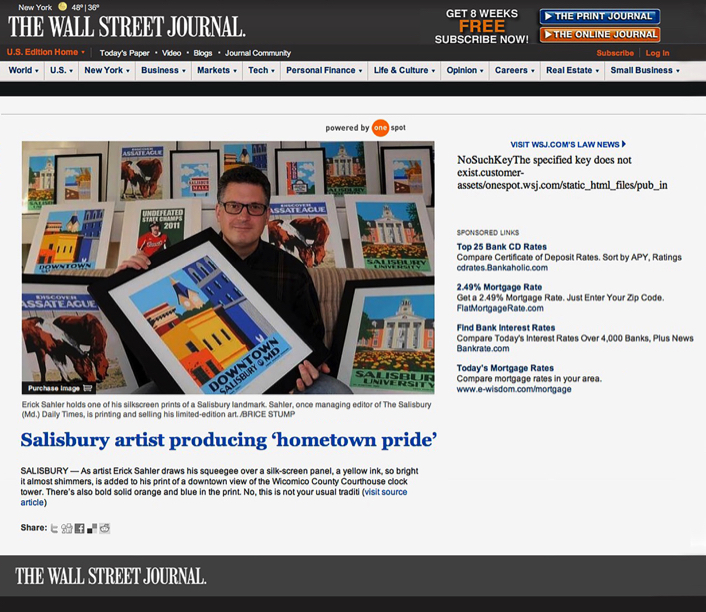 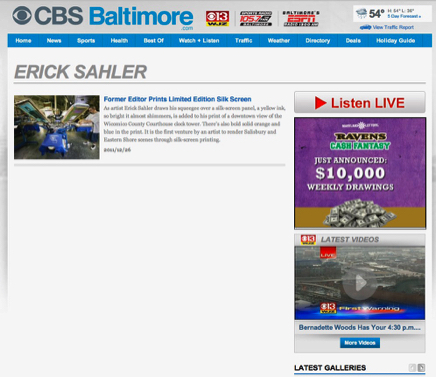 SALISBURY, Md. (AP) — As artist Erick Sahler draws his squeegee over a silk-screen panel, a yellow ink, so bright it almost shimmers, is added to his print of a downtown view of the Wicomico County Courthouse clock tower. There's also bold solid orange and blue in the print.

No, this is not your usual traditional watercolor or painting of landing geese and ducks, deer or Chesapeake Bay retrievers. Yet it is the first venture by an artist to render Salisbury and Eastern Shore scenes through silk-screen printing.

“The name for the process is serigraphs, a fancy name for artwork made by the silk-screen process,” Sahler said. “The fabric we use today is not silk, too expensive to use these days, but a man-made fiber.

“I am trying to produce a ‘hometown pride’ sort of thing through what I call ‘My Hometown Series.’ It's been a long, long time since anyone has produced artwork that celebrates Salisbury. Salisbury has had more than its share of black eyes. When you love the Shore and love your home and in your very small way you can do something to turn that (negative image) around and celebrate your home, that’s what motivates me. When people see my work, I think they are saying, ‘Hey, that's a cool image of Salisbury, I’ve not seen anything like that before.’

“There is a deep sense here for anything historical, people latch onto it. It is part of our Eastern Shore culture. I want my serigraphs to look like travel posters. In the 1930s and 1940s the federal government hired artists — during the Works Progress Administration — to design travel posters, like the well-known ones for the national parks. This is the kind of artwork I’m doing that I hope that the mayor or the lawyers downtown would want on their office walls.”

While the images are not meant to be true renditions of building colors or precise location of structures in a landmark scene, for example, the use of bold solid colors represents the basic elements of a scene.

“I don't know if anyone would be interested in it if it looked like it really does. You have to do something as an artist to take it a step further. My stuff is Erick Sahler’s presentation of what it is, combined with the limitations of screen printing, that gives you something different.”

To date he has produced three of the My Hometown Series scenes — Assateague ponies, Salisbury University and Downtown Salisbury as well as three “gullfriends” in a smaller print size — The Globe Theater sign, old Salisbury Mall sign and Thrasher’s French fry cup — each that includes three seagulls. “They are in a different style, a little more cartoony and fun,” he said.

“I want to release one image a month of an Eastern Shore icon in both sizes. Subject matter for these is endless. Already I’m thinking English’s chicken, the old Oaks Drive In, Watson’s Smokehouse, anything of the OC boardwalk. It just goes on forever.”

It is the simplicity of the image and the use of bold colors that entertain, delight and tease the eye. It is deceptive simplicity.

Unlike mass-produced images or work straight from the printer, Sahler’s silk-screen artwork is one of a kind.

“I have to simplify the scene. The way I do silk-screening, you get a solid field of color. In a finished print, it is color, over color, over color — fields of color. Every color is hand blended, nothing is straight out of a tube or can. These colors will not fade like those from a desktop printer. What sells this artwork is that it is bold and colorful, and that makes it different,” Sahler explained.

“I find myself trying to explain to people why this artwork is different than other work, like machine-printed artwork. This isn't a case of ‘pushing Apple P’ on a keyboard and taking a print off my desktop printer. This is real Eastern Shore stuff that does look old-timey. It is unique, handmade, hand printed.”

Each finished serigraph starts as a pen and ink drawing, and individual screens are made for each color in the print. So, a color is screened on paper, the sheet is removed to dry. Then it is replaced and another color added, and so on. For some of his prints, that's 11 repetitious steps to produce a completed image.

“This was a popular way of producing art in the 1960s. Artists like Andy Warhol and Roy Lichtenstein, and others in the pop art movement, produced art that was all screen printed, especially posters, and it was considered fine art.

“I have always wanted to do this. When I was in college I saw artwork by Joseph Craig English on display in the Columbia Mall. I use to stand there and ogle over it. I loved the look of it. It looks like the artwork I am doing now, but at that time I had never seen anything like it before. You didn’t see that kind of thing around Salisbury, with real hard edges and bright colors. One in particular I liked was several hundred dollars,” Sahler said. “I couldn’t afford anything like that then, but, by chance, my girlfriend and I found an envelope full of cash on the street in Glen Burnie. There was $300 inside and we split it. We went to the mall. She bought clothes and I bought a piece of English artwork and it has been with me all my life. But that planted a seed, that you could do art in the style I loved and sell it. That was about 1987 and that seed stayed buried until two years ago.”

That was when Sahler began assembling the production components for his studio.

Sahler, hired as a graphic artist for The Daily Times in 1989, retired earlier this year as managing editor to pursue a young college boy’s dream of producing his own artwork.

“I did silk screen-work for six years with Dave Rossi at Chesapeake Screen Printing, starting while I was in high school and stayed through UMBC years. After college, and still working for Rossi, I did part-time graphic work, illustrations, for The Daily Times. I fancied myself a fine artist, learning from local artist Keith Whitelock about art technique and learning an appreciation for the uniqueness of the Eastern Shore. Then I came to The Daily Times full-time. I've only had two employers in my life,” he said.

It is the commercial evolution of an artist.

“When I first started with Rossi, there were a number of advertising agencies in Salisbury, like Ginny Cleary Designs, Paul Kratzler, Heineken and Fineran and Robin English. There was a strong local market for their artwork. I thought I would come home after college, do a little work here and there and eventually start my own studio doing advertising artwork. Then the market dried up. Everyone got a desktop printer and computer and learned they could set type for themselves, they didn’t have to pay a designer to do it for them. Of course the quality of the work wasn't the same. In 10 years, the established artwork businesses here was gone.”

Now it has come down to a previous few remaining in the regional commercial advertising field. For Sahler, he is happy that the time was right to devote his talents to producing a line of serigraphs on Shore scenes.

It was a time in his life to give his dream a chance.

“I do not work with clients, I am not a print shop, I do my artwork and that's all I do,” he said. “My wife, Tracy, supports the family right now.

“This is all virgin territory for me. I wasn’t going to try to sell anything until spring. When my two daughters went back to school, I started work in the studio full time, 12-hour days, six days a week,” he said. “My plan was to get in my studio in September and start printing stuff, to build stacks of inventory. I can do two a month, a large and small one. I consider my work as fine art, handmade and limited to 120 copies. When that run is done, I’m not making any more of them.

“Then, when the weather got nice and the show circuit started, I would have a dozen things to display. I have never done anything like this before, I have never sold a thing in my life. I have spent most of my professional life in an office managing a newspaper. This past month I haven’t printed a thing. I have been busy framing and going to shows.” 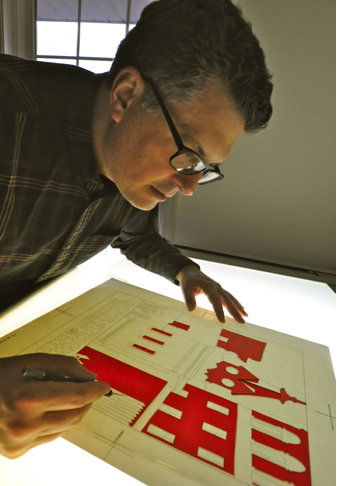