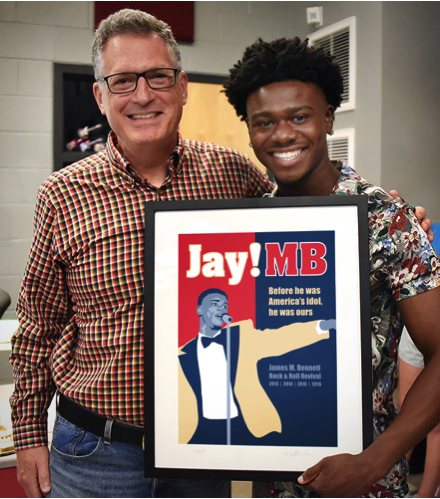 American Idol star Jay Copeland visited James M. Bennett High, where my framed illustration of him will hang in the school’s auditorium. 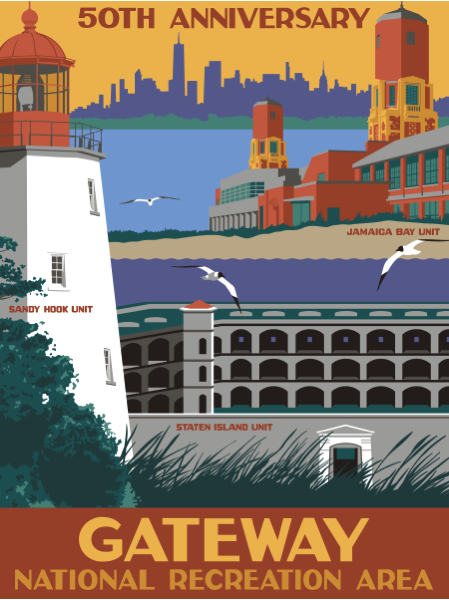 To celebrate the 50th anniversary of Gateway National Recreation Area, the Jamaica Bay-Rockaway Parks Conservancy commissioned me to create an illustration featuring three of the park’s iconic landmarks. The artwork was donated to the National Park Service and was featured on dozens of banners along the Jacob Riis Park

It came as no surprise to folks on the Eastern Shore when Salisbury, Md., native Jay Copeland began wowing judges during the 2022 season of “American Idol.”

After Jay sang “Lilac Wine,” Lionel Ritchie said it was “one of the greatest performances” he had seen “IN HIS LIFE!”

Jay’s incredible voice, electric stage presence and humble demeanor have been winning over Delmarva fans since he was a child. YouTube videos document his rise, from crooning dressed as a reindeer during a Salisbury Middle School holiday concert to his showing-stopping numbers during the annual “Rock & Roll Revival” at James M. Bennett High School.

I was feeling my Clipper pride at a JMB baseball game when this idea came to me. I made a quick sketch in my notebook and developed the illustration the next day from a photo my wife Tracy shot of Jay performing during his senior year. Jay’s iconic gold jacket will be enshrined in the lobby of the Bennett Auditorium, where the “Rock & Roll Revival” has been held for more than 20 years, along with my framed print.

The illustration is my gift to Jay’s fans. It may be shared freely online and there is a free downloadable PDF here. 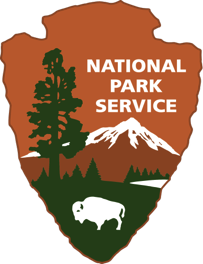 promenade in Rockaway, N.Y. In addition, the illustration was used on posters, postcards and more.

Gateway National Recreation Area is the fourth most-popular national park in the United States, with 10 million visitors annually. It was created by Congress in 1972 and comprises three units, including sites at Sandy Hook, N.J.; Staten Island, N.Y.; and areas surrounding Jamaica Bay in Brooklyn and Queens, N.Y. Activities and events marking the 50th anniversary will be held in October.

My illustration features the Sandy Hook Lighthouse, the oldest continuously operating light in the country; Battery Weed at Fort Wadsworth, built in the 1840s-1860s to

defend New York harbor; and the Jacob Riis Bathhouse, a mammoth Art Deco pavilion on the Rockaway Peninsula. Mixed in with the landmarks are natural elements including trees, dune grass, wetlands and a trio of laughing gulls. The Manhattan skyline looms on the horizon under a golden sky, suggesting the park’s 50th anniversary.

The illustration was designed in the style of the Works Progress Administration artists of the late 1930s, employing a limited palette and broad fields of flat color. The typography was created from signage at Gateway’s Great Kills Park on Staten Island.

For more than a decade my work has been inspired by the classic National Park Service art created by the WPA. To be commissioned to create an illustration for something as monumental as the 50th anniversary of Gateway is a dream come true.

The illustration is my third commission from the JBRPC. Previous designs highlighted the natural environs of Jamaica Bay and the beach community of Rockaway.

“As an official philanthropic partner of Gateway National Recreation Area, we are thrilled to donate to the park this handsome artwork by Erick Sahler,” said Scott Middleton, Partnership Planner at JBRPC. “In celebration of the park’s golden anniversary, Erick’s illustration captures the natural features and iconic landmarks that make Gateway such a special place for visitors.” 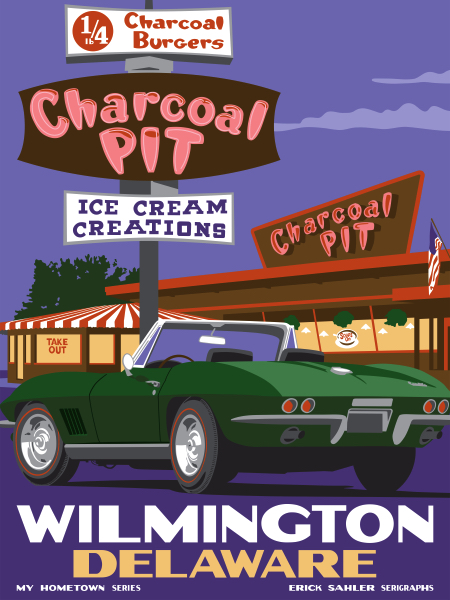 The “My Hometown Series” is expanding to Northern Delaware and the Brandywine Valley.

Now comprising more than 70 prints, the series was launched in 2011 to celebrate the deep connections residents and visitors form with Delmarva locales. Over the years, the series has grown from Salisbury — my hometown — to include Cambridge, Chincoteague, Ocean City, Oxford, Rehoboth Beach, St. Michaels and a host of other Lower and Mid-Shore communities.

The new prints feature Breck’s Mill and the Charcoal Pit in Wilmington and Kuerner Farm in Chadds Ford. They will be offered exclusively at the Brush Factory’s new location opening soon at 425 Hockessin Corner in Hockessin, Del., and on our website.

I could not be more excited for this opportunity. Tracy and I have spent several years studying the Wyeth family and exploring the area along the Delaware-Pennsylvania border where they lived and worked. The Brush has offered a real gift in allowing me to create and sell my work in this scenic and magical area.

The legendary Charcoal Pit on Concord Pike has been a Wilmington landmark since 1956. 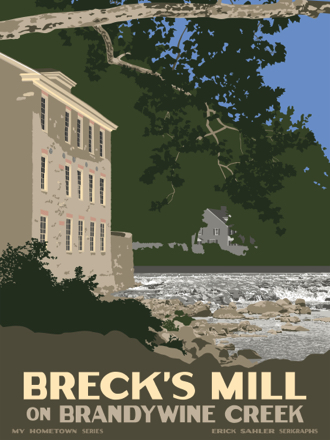 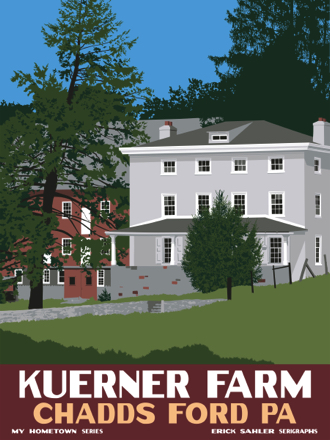 Breck’s Mill and Kuerner Farm are nationally recognized historic sites located in the scenic Brandywine Valley on the Delaware-Pennsylvania border. 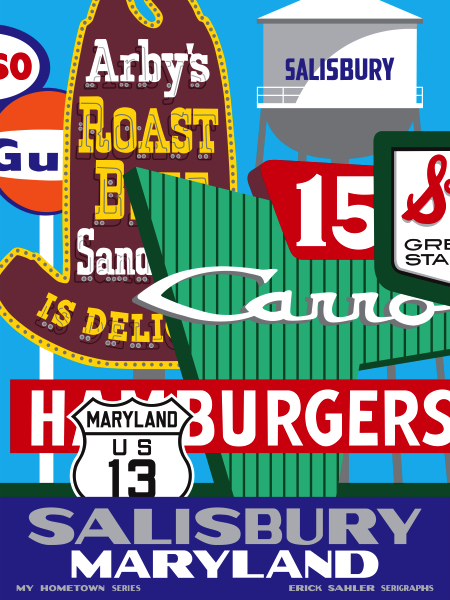 “The Boulevard” recalls the commercial strip in Salisbury when I was growing up in the 1970s.

SIGNS OF THE 1970s FEATURED IN ‘BOULEVARD’ PRINT

A cousin once said we Sahlers are so sentimental, we cry reading the phone book.

Well, not every time.

But an old black-and-white photo posted recently on social media did stir me. In it, a couple of 1970s-era sedans travel north on US 13 across from then-Salisbury State College. What grabbed my eye, however, was a collection of gas station and fast-food restaurant signs under the old city water tower. I grew up with that scene — the visuals, the sounds, the smells — and I knew it as well as the back as my hand.

My new print “The Boulevard” celebrates that time and place — quintessentially Salisbury in my mind, though really it could be any mid-size American town of that era. 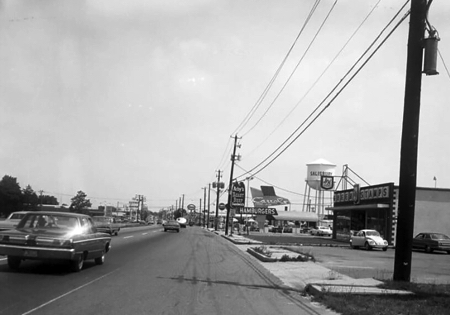 An old photo that recently surfaced on social media was the inspiration for my “Boulevard” print. 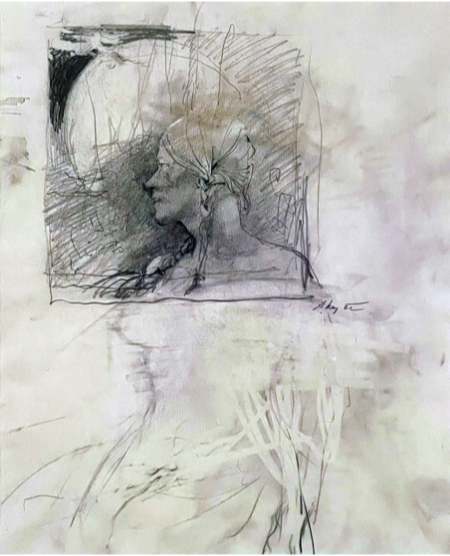 You can see Andrew Wyeth working out the composition in this sketch for “Drawn Shade.”

We went south to explore the vast collection of Andrew Wyeth watercolors at the Greenville County (S.C.) Museum of Art, but along the way we discovered a half-dozen other galleries well worth exploring.

Wyeths are the centerpiece of the Greenville Museum, with two large rooms filled with dozens of watercolors and sketches by Andrew Wyeth, including more Helga pieces than we had ever seen in one location. The rooms highlight art by his son Jamie Wyeth, too.

At the Georgia Museum Art in Athens, I learned one of my favorite painters, Frenchman William-Adolphe Bouguereau, had an American wife — Elizabeth Jane Gardner Bouguereau — who not only painted as well as her husband, but copied his “academic” style as well. Her painting “La Confidence,” the museum’s star attraction, created a stir when it came to life in a 1991 REM music video.

In Winston-Salem, we marveled at an exhibit of large contemporary photorealistic paintings at the fabulous Reynolda, the former home and gardens of tobacco tycoon R.J. Reynolds. “Chrome Dreams and Infinite Reflections” features the mind-boggling works of a dozen painters including Richard Estes and Robert Bechtle.

At the North Carolina Museum of Art in Raleigh, I discovered Georgia O’Keefe’s architecture pieces, painted in bold flat colors and without a hint of hidden feminine imagery. We also took in a traveling exhibit from the Phillips Collection, where we were dazzled by Cezanne, Monet, Degas and, especially, Van Gogh.

Finally, in Norfolk we explored the vast collection of the The Chrysler Museum of Art, and learned about 20th century printmaking from a temporary exhibit of works called “Lasting Impressions.” 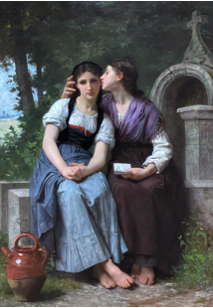 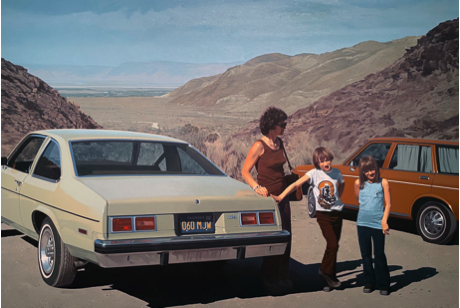 Elizabeth Jane Gardner Bouguereau’s “La Confidence” shares all the hallmarks of the paintings of her more famous husband. Robert Bechtle captures the American West of the 1970s with boxy cars and the classic color palette of the era: browns, oranges and avocado green. 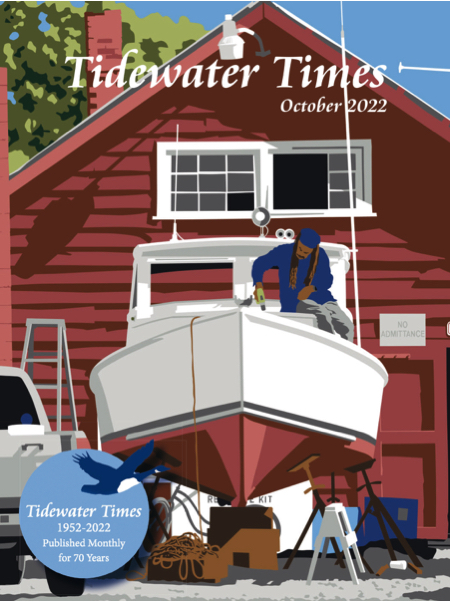 GRACIAS, MERCI, DANKE, GRAZI AND THANKS TO …

Ida May. Thanks to Capt. Gordon Gladden and the crew of the skipjack Ida May for installing my No. 44 replica dredge license plates on the historic boat. The Ida May is the third Chesapeake Bay skipjack to “wear” my screen-printed plates, following the Kathryn and the Minnie V. 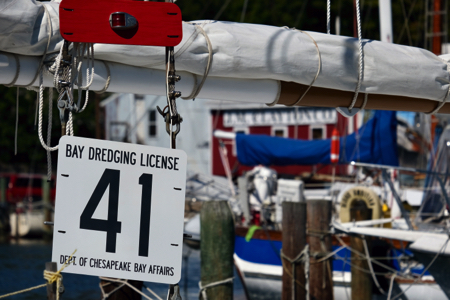 “Crockett Bros.” is my fifth illustration featured on the cover of “Tidewater Times.”

Illustration magazine. From Decatur, Ill., deep in the heart of soybean country, Daniel Zimmer has for more than two decades been preserving the history of America’s golden age of illustration. New editions are issued four times a year and feature hundreds of high-quality reproductions of the great editorial and advertising illustrators of the first half of the 20th century. In addition, Zimmer has published two dozen books of works by some of his favorite artists. I have been a subscriber and collector for years and highly recommend Zimmer’s works for anyone with an interest in illustration. Learn more here.

This colorful quilt caught our eye in Seneca, Kan. 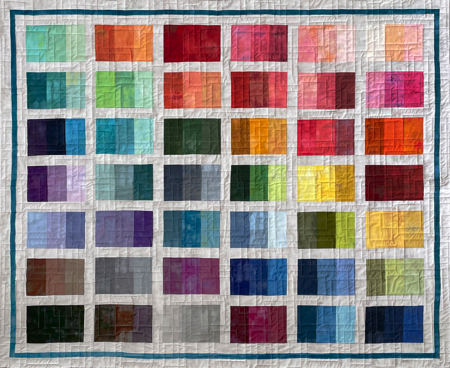 Seneca quilt. Hanging in a storefront window in Seneca, Kan., it caught our eye from across the town’s broad main street. What appeared to be a giant Pantone color guide was in fact a full-size quilt, stitched by hand by the ladies quilting guild, which also run the town’s surprisingly well-stocked variety store. Friendly and humble, they explained their processes in creating a quilt and as we listened I was reminded of the magic we always seem to discover on our road trips across America. The quilt came with us, and it now occupies a special spot in my print shop. You can contact the Seneca quilters here. 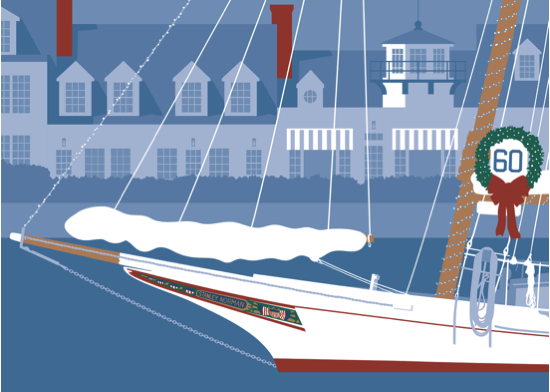 My illustration of the skipjack Stanley Norman is featured on the Inn at Perry Cabin’s 2022 Christmas card.

Inn at Perry Cabin. Thanks to Michael Hoffmann and Katherine Saad-Loman for the opportunity to illustrate the cover of the St. Michaels landmark’s 2022 Christmas card. My work features the skipjack Stanley Norman, decorated for the holidays, docked in front of the Inn’s renowned Stars restaurant.

You. In 2022 I was able to create 18 new prints, including a commission piece celebrating the 50th anniversary of Gateway National Recreation Area. I owe every success to you, the people who support my dreams. Thank you, thank you, thank you.

Being commissioned to design the 50th anniversary poster for Gateway National Recreation Area was a dream come true.