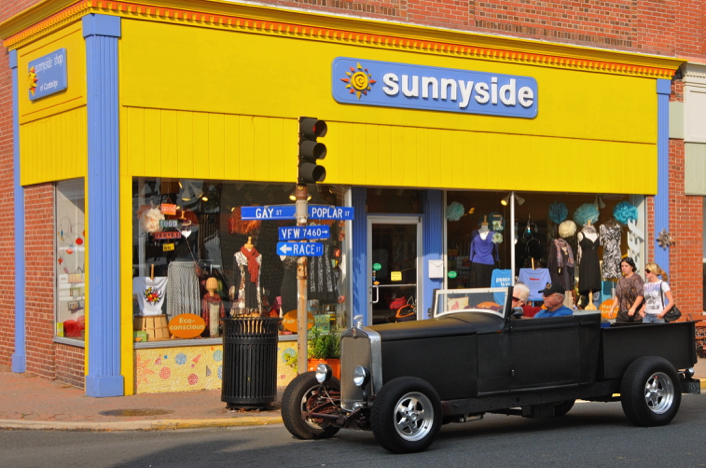 CRABS, BEER AND BIKING: WHAT MORE COULD YOU WANT THIS WEEKEND?

Cambridge, Maryland, may not receive the adoration that its tonier Talbot County cousins—St. Michaels, Easton, and Oxford—do, but it has an air of Eastern Shore authenticity that you won’t find in those other burgs.

They still pick crabs by hand at J.M. Clayton Seafood Company, which claims to be the world’s oldest crabhouse. (Pick up a pound of jumbo lump to go at its on-site store.) The Simmons family has operated Simmons Center Market, another institution, since 1937. Locals shop here for $3.99 lunch specials and house-ground sausage, as well as poinsettias and other holiday goods come Christmastime. Craig’s Drug Store, in business since 1867, is worth a gander for its selection of Eastern Shore gifts among the bottles of cold remedies.

Other than the unsightly gas stations and fast-food joints along Route 50, the landscape hasn’t changed much since Colonial days. Rural farmland and marsh still dominate the scenery south of town all the way to Blackwater National Wildlife Refuge, which comes alive every November during fall migration. Across from the refuge is Harriet Tubman Underground Railroad National Historical Park, which celebrates the life of the escaped slave and humanitarian, who would likely recognize many remaining area landmarks, including the nearby Bucktown Village Store, where another slave’s belligerent overseer once hit Tubman in the head with a two-pound weight.

Like many motorists, you’ve probably sped past Cambridge on your way to Ocean City, but you might want to take a cue from all those migrating birds and stop for a spell.

Brick-paved High Street, lined with ancient Osage orange trees, sycamores, and 18th-century houses that belonged to Cambridge’s elite, is one of the prettier avenues along the Eastern Shore. Stroll down the lane from Christ Episcopal Church to Long Wharf, where you’ll find excellent views of the Choptank River and a replica of a six-sided screwpile lighthouse that once stood near this spot. The Dorchester County Visitor Center (2 Rose Hill Pl.; 410-228-1000) provides walking- tour maps.

November is peak season at Blackwater National Wildlife Refuge (2145 Key Wallace Dr.; 410-228-2677), as the numbers of migrating ducks, geese, and tundra swans spike. Witness the avian cacophony on one of the refuge’s hiking, biking, or water trails. Blackwater Paddle & Pedal Adventures (410-901-9255) rents kayaks and bikes by the hour or day and leads eco-tours by appointment.

Sunnyside Shop (500 Poplar St.; 410-901-9009) sells environmentally friendly, fair-trade, and US-made women’s clothing and jewelry in a cheerful space where everyone seems to know each other’s name. It’s also a good source for gifts and locally made art, such as Erick Sahler’s colorful silkscreen prints of Eastern Shore locales.

Seriously, High Spot Gastropub’s “crapple salad”—scrapple and crabmeat on a bed of mixed greens—tastes far better than it sounds. The menu at this popular spot (305 High St.; 410-228-7420) features other creative dishes such as Buffalo oysters—fried oysters in wing sauce—and battered bites of cauliflower dressed in a sauce à la General Tso.

Crabs may rule on the Eastern Shore, but lobsters star at Rock Lobstah (315 Gay St.; 443-477-6261), where diners down rolls topped with everything from Thai chili sauce to pico de gallo. Also check out the long list of “steam pots,” swimming with crawfish, clams, mussels, or snow-crab claws.